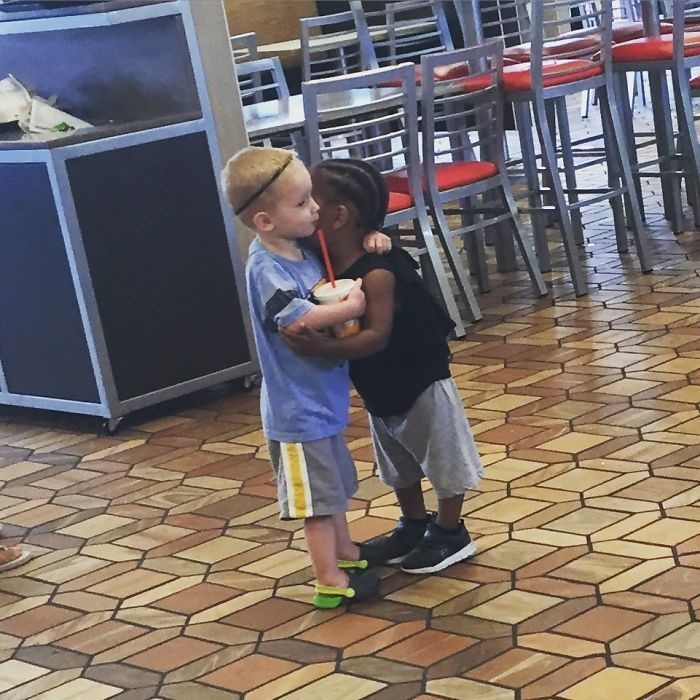 As the world advances towards new technologies, we are experiencing a loss in humanity. Everyone is focused on getting ahead instead of taking other people along with them on the journey. However, there are many people who were born simply to restore the faith of the humanity in others around them.

The gentleman in the picture is Carl Manley and he was asked by an old woman for help crossing the street. She then asked him for help walking to her home and Carl helped her in order to prevent her from slipping on ice. They have become really close friends ever since Carl started to help her on a regular basis.

This is the story of California Highway Patrol officer Kevin Briggs and Kevin Berthia. Berthia was on the Golden Gate Bridge because he was questioning the meaning of life. Briggs convinced him not to jump and the two later met at an awards ceremony.

Taking Care Of The Neighbor’s Lawn

Rodney Smith Jr. started an organization called Raising Men Lawn Care and the team began to mow the lawn of all the neighbors who could not do so because of physical issues.

Help On The Highway

Helping Him Tie The Knot

The woman in the red coat saw that the young man was having trouble tying the knot of his tie. So, she asked her husband to help him and the old man gave the much required assistance.

The Kids Get Along

Maybe the grown ups can learn a lesson here. Children are always filled with love and they exhibit it without any discrimination. This hug is evidence that we can live together in harmony.

Rolling To A Hug

This nurse saw her former patient in the wheelchair and she was very happy to see her. However, she was in for a shock when the patient got up and hugged her.

Anthony Borge is a 15-year old boy who made a body shield out of himself and kept the door to his classroom shut as another student fired shots through the door. He saved the lives of 20 other students in his class.

Jack had saved $20 in his piggybank in order to buy an Apple iPad. However he saw that a local Islamic mosque was vandalized and he donated the money to the mosque. The mosque responded with a gift for the little boy.

The Ride To Life

The man in the bed booked an Uber when he wasn’t feeling well. Instead of just collecting the fare, the Uber driver stuck around and made sure that the man was well enough before he left his side.

The woman in the picture is suffering from Huntington’s Disease and had difficulty eating food. Her husband had to feed her while his food got cold. This is why, the waiter decided to help the couple out and helped feed the woman.

The dad in red was worried that his son had failed because he was unable to help him understand fractions. This other guy started to help him out by becoming the math teacher for a day.

Loving Everyone Around Them

While adults may shy away from communicating with people of other colors, this young child had no fear and was happily smiling at the brown girl on the subway ride. The happiness in the picture is just pure.

This picture was taken during the Ferguson Protest in Portland. The boy in the picture decided to spread love in a place that was on the brink of civil war.

There Is A God

Holidays are all about bringing about the generosity in people. This homeless man saw that generosity when people left out food for him while he slept on a park bench.