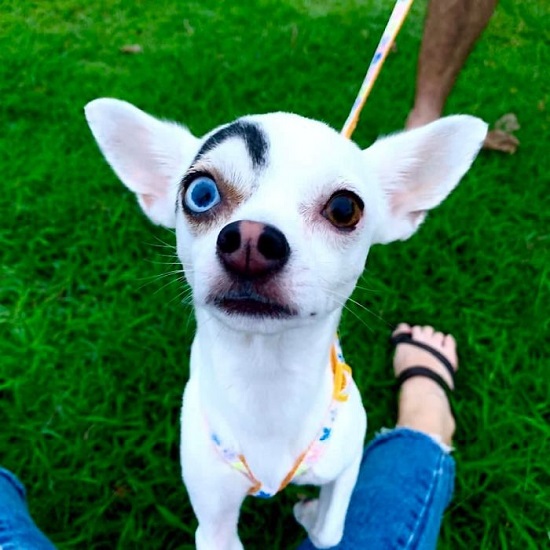 The web is level playing ground. With billions of users online, you can become a star overnight. If you are unique in one way or another, be it because of your appearance or your talent, then you will win fans over in no time. Such is the case of Lucky, a rescue dog from Thailand. He was found in a foster care institution and was recently adopted. Find out why he’s such a rage over the internet –

Charice Fca Cha, the dog’s owner told a leading viral website "I saw a post on Facebook that said that Lucky needs to find a new home. When I saw his face, I immediately knew I wanted him so I contacted the owner to adopt him. I was surprised by his appearance but I thought he is perfect and very unique."

2. He Was Adopted By 29-Year Old Charice Fca Cha

Lucky is a cute and adorable dog. No person in this world could have the heart to refuse him. Thankfully, it was Charice who did the honors by bringing Lucky home. The moment she saw the dog, she knew that it belonged to her. It seemed that both of them were like a couple whose match was made in heaven.

3. He Has A Black Mark And A Blue Eye

Lucky is not your ordinary dog whom you could find in the corner of the street. He is a rare chihuahua mix and he also has a blue eye with a mark on his forehead. The blue eye is a result of a rare defect called heterochromia. This mark looks pretty much like a raised eyebrow. If you have seen Dwayne ‘The Rock’ Johnson during his wrestling days, the mark kinda resembles that.

4. People Thought The Mark Over His Eye Was Made With A Permanent Marker

The mark is 100% natural and it is common among mixed dogs. But still, people think it to be a fake and most have them asked Charice whether it has been made by a permanent marker or not. Some of them think that Lucky’s images have been doctored in Photoshop. Charice has even tried explaining to them that the mark is not a man-made feature, but to no avail.

5. Although Lucky Is Mischievous, He’s Extremely Possessive Of Charice

Lucky is a frisky 2-year old canine, who is always up to one mischief or another. According to Charice,” "He is very mischievous, hyper, nervous, scared of any sounds and people, and a bit aggressive but I know this is because he's never met other dogs or other people. Sometimes he bites Harry, my other dog because Lucky is very possessive of me. I'm planning to send him to school to learn how to be sociable. Other than that, he is very snuggly, playful, intelligent and he listens to my orders"¦ sometimes."

6. He’s Already A Star Over The Internet

Thanks to the viral nature of the web, Lucky is extremely popular. His posts attract a lot of attention. When Charice shared Lucky’s photograph on a dog owners' community on Facebook, it received 11,000 likes and over 600 comments. It looks like the young critter has become the darling of millions and billions of eyes over the internet.

7. Almost Everybody Who Sees His Shots On The Web Wants Him

When you have a cute face, there is nobody who would refuse you. This lady here thinks that she feels Lucky’s unsure of their free-spirited behavior. Is it, really? I think it would be better if Lucky answered this question. Whatever be Lucky’s verdict, his photos are awesome and have built up a storm over the web.

8. There Are Some Good-Humored Jokes About Lucky Which Is Doing The Rounds

Since Lucky’s a hot topic online, he has a lot of literature devoted to him over the social media sites. The woman here thinks that Lucky’s looks are quite cute and funny. She says that Lucky’s face looks like an unfinished makeup project. It seems like he stopped halfway through his makeup session/tutorial. So, what do you think about Krystal’s opinion, Lucky?

9. He Is Cuteness Overload

Barbara, here is one of the skeptics who cannot imagine how Lucky got that mark over his eye. It seems that she’s asking the question more out of curiosity rather than being sarcastic. But she’s also convinced of the fact that the dog is irresistibly cute.

10. Those Who Get To See Him Can’t Seem To Forget Him

Of course, with such striking facial features, this face is not of the blink-and-you-miss types. It has a lot of recall value, especially because of the differently colored eyes. It looks like one of Lucky’s disadvantages has been favorable to him. His unique looks are what sets him apart from the regular dog.

11. His Raised Eyebrow Is The Cynosure Of All Attention

The eyebrow, as you all have discovered seems to deliver the message, “I have got tons of attitude.” The cutie pie looks like he hates it when people mess with him. When you are confident of the way you look, it becomes like an honest and prominent piece of style. Just works wonders on your personality.

Since Lucky’s got a mistress, there are chances he would have to endure a makeup, at least once in his lifetime. How will he look with and without makeup? Charice doesn’t need to imagine a lot. Lucky’s face looks like a before and after makeup transition face. Angie’s got this one right.

Although Lucky is a cent percent chihuahua breed, his eyes make people think that he’s got a bit of husky in him. We don’t know a lot about that, and the only person who discloses this would be a vet. Whatever be Lucky’s breed, we know he’s a handsome lad.