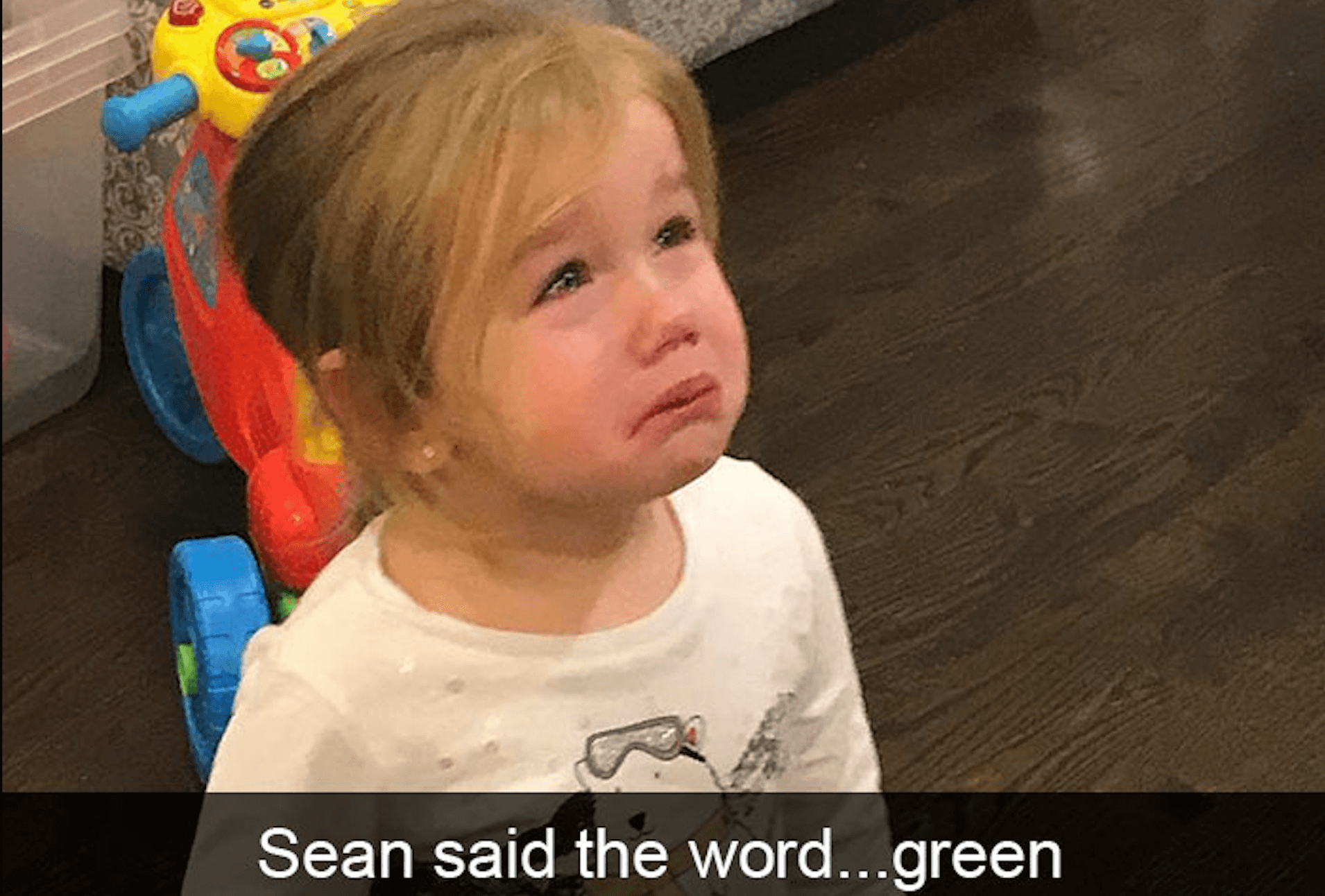 There are many reasons why someone cries but these reasons generally do not apply to children. Children cry because of extreme emotions, generally because they are either hungry or sad. However, many children are quick to learn that there are a lot more reasons to cry and they start to find reasons in life. Many parents have shared pictures of their children crying on the internet but there are some who shared pictures when their children cried for some of the most hilarious and absurd reasons.

He Really Wanted That Book

When You Cannot Hide The Swimmer In You

This is good parenting. The father did not want to let the little guy to get cold because of the low temperature. However, the baby would not have it and started to make a fuss on the beach because he saw the big blue ocean and wanted to go in for a swim.

When You Start To Change Your Mind Often

Look at that angel cry. It makes you want to fulfil her every wish. Her mother tried to do exactly that by making the ravioli that she wanted for dinner. However, after some time, the little kid did not want ravioli and started to cry again.

Suppressing The Traveller In You

This little guy wanted to go out and explore the world. However, he wanted to do that on the bus that was in the TV. Children have many unrealistic demands and not all parents can find a way to fulfil their wishes.

All I Want Is My Cheese Stick

This is a fete that would have been impossible to achieve. The little guy wanted a cheese stick but not the one that was right in front of him but the one that he had already eaten. Children cry about the most absurd things sometimes.

Mistaking A Pad For A Sticker

There are some things which you cannot just explain to the children. Sometimes it is because they are too young or sometimes just because the things are not meant for them. Take a look at this child for instance. He wants to hold on to the sanitary pad and wants it to be his sticker.

Early Life Enmity With The Sun

Grown ups have a difficult relationship with the Sun because it means that they have to get up and go about with their routine. This little one had a problem with the sun because he could not see his pumpkin light up as long as the sun was out. He started to cry when his mother could not switch it off.

Kudos To His Mom

Children have the weirdest requests because they do not fully understand everything in life. Take for instance this young lad who wanted to hold his own poop in his hands. When his mother would not let him do that, he started to cry.

What would you do if your mom does not let you have your favorite breakfast treat? Probably pout and sulk all day. This young fellow is nothing different. Except for the fact that he wanted his breakfast treat to be a battery.

Flowers reach the end of their cycles when the winter hits the town. However, we make our peace with it but this child is different from us. The child began to cry when his parents could not bring the daffodils back to life.

Now I Want A Cycling Backpack

We all know that cycling backpacks do not exist but they would certainly come in handy when you want to take your belongings with you when you go cycling. This little guy was right to cry about it.

When Your Parents Hate Your Friends

Everyone hates bugs. Except for this little girl. She apparently made the bug in the laundry room her best friend. She did not tell her parents about it and they did the relevant thing and killed it. The girl was right to be upset about it.

All She Wanted Was To Get Clean

Not every child is enthusiastic about getting clean and taking a shower. However, this child is different but her version of getting clean is a bit different. She wants to get clean in the dishwasher and started to cry when her mother won’t let her.

Not Loving The Pets

Many children hate their pets when they are young because they do not want to share the love of their parents. However, this little one took things to the next level when he started to bite the cat. His parents had to ask him to stop and he started to cry.

All He Wanted Was A Yellow Cup

The little child wanted a yellow cup as in a cup colored yellow. However, his mischievous parents showed him a picture of the yellow cup fungus and the child began to cry because he did not understand why his parents were being mean.

She Is Too Young

Women’s razors are things for grown ups. This little one was adamant that she wanted to buy the woman’s razor because she is a woman. However, when her mother wouldn’t buy them for her, she started to cry in the supermarket.

This Is Plain Hilarious

Kids are often too much to handle for the parents and this is evident from this picture. The little girl started to cry when her mother would not allow her to throw books at her face.

She Wants To Paint Her Toes

The little angel is a big fan of painting her nails and started to cry because she painted all ten of her toes and then had no more toes to paint. Imagine the hardships faced by the parents of this little girl trying to make her understand the situation.

Crying At The Littlest Things

When Sean, the little girl’s father, said the word “Green”, she started to cry. We cannot understand the reason behind her woes with the word but her face just makes you laugh and hug her to get her to stop crying.

There are many kids who start to cry when their parents clip their nails. We finally have an answer why they do so. The child in the picture wants his parent to attach the nails back to his fingers and toes.

When You Don’t Want Gifts

Most children cry when you don’t buy them things or when you take their toys away. However, this child is different. He cried because his father bought him a kite.

That’s Not Your Food!

What would you do if you saw your cat eating its food and enjoying it to the fullest? Surely you would do anything but start to eat cat food yourself. This child did not understand that and started to cry when his mother didn’t let him eat the cat’s food.

Saying Goodbye To The Poop

The little girl worked quite hard in potty training and then on the toilet that morning. However, she was not able to see the fruit of her labor since her mother flushed her poop before she could say her goodbye.

Not Sharing With Anyone

There are many children who do not like sharing their toys with anyone. This girl is one of them and she doesn’t like sharing even with her parents. She started to cry when her father merely touched her balloon.

Parents are very concerned with the safety of their children. However, the children do not understand that fear. Take this girl for instance. She wanted to run into the road but her mother stopped her. She began to cry as a result.

When You Just Can’t Get Enough Of The Bath

Have you had a shower so good that you want to take it all over again? This child felt the same thing. However, her mother did not let her go into the bath again after just getting out of it. As a result, she began to cry.

Trash Is Not Food

Children hate it when you stop them from anything. This mother posted a snap of her little guy crying when she stopped him from eating trash. Sometimes, kids do the most absurd things.

Genevieve Had It Rough

All Genevieve wanted to do was play with the ducks but then she did not know that the ducks could play rough. She soon found out the truth and then made this adorable face while crying about the fact that the ducks roughed her.

Not The Cake She Had In Mind

The little girl wanted a unicorn cake, perhaps one that was in the shape of the unicorn. However, her parents got one with the picture of a unicorn. She began to cry about it and her parents were baffled.

Not Quite The Detective

This little guy had quite a lot of trouble taking off his pants and was on the verge of crying. He was pushed over the edge when he could not find out where that booger went which fell out of his nose.

She Did Not Want To Hurt Her Mother

This is a clear example of the innocence that children have. They do not want to hurt anyone and when her mother said ouch because of the stool on her toe, the little girl began to cry.

Making Up Your Own Colors

Many guys find it very hard to understand all the different shades of pink. It becomes harder when your daughter is crying because of the fact that you did not hand her the right shade of pink. It is all about hit and trial from there on.

Killing The Bugs Inside You

Like we said, children hate it when you stop them from doing something. This little girl wanted to drink the chemicals that the family had stored under the sink. When her mother stopped her, she began to cry.

Wanting The Bubbles Inside You

Bath bombs are quite the invention that allow you to enhance the whole bathing experience. When the girl in the picture wanted to bring that experience inside of her, she thought that eating one would do the magic. However, her mother won’t let her.

All In Good Time

Children are pure at heart and want the simplest things. This little diva found her mother’s shoes to be too cute and started to cry in anger when the shoes did not fit her.

Children are often grossed out by the smallest things. This little guy started to cry simply because there was a piece of fuzz on his leg. Perhaps, he thought that it was a spider trying to climb up his leg.

Saving Them From Disasters

Parents are protective of their infants and are always trying to save them from themselves. This little guy wanted to pull his high chair and the parent was worried that the chair might tip over causing injury. When they tried to stop him, he started to cry.

Understand What They Mean

Have you ever asked for a small amount of something that you want more of? Remember all the times that a bit into a burger turned into you eating half the burger? This little girl wanted to eat M&M’s and asked for two and her mother gave her exactly two. I feel ya girl.

Not Wanting To Change Things

Sometimes, you like things just the way they are and do not want them to change. This girl was the same and got all upset when her parents brought in a new microwave.