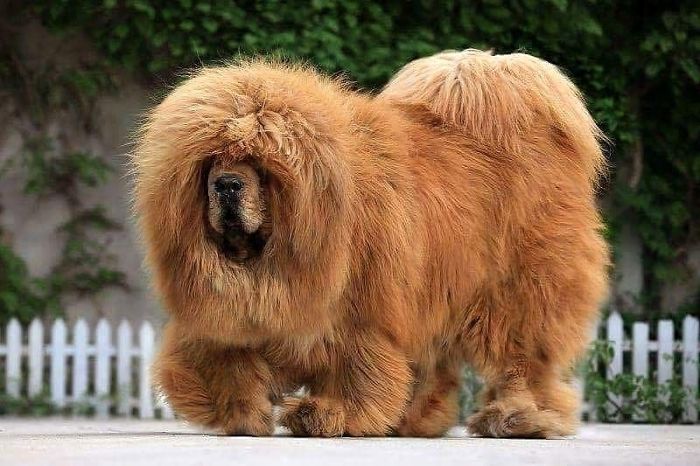 Tibetan Mastiffs are one of the oldest species of dogs in the world. No one knows how the species came to be and that is because the country of Tibet is one of the most isolated countries in the world. Tibet is also a cold country which is why the dogs are rather huge. The thick fur is an adapted feature that helps them battle the cold. The females in the species grow up at least 24 inches and the males stand proud at more than 26 inches.

The family that grows fur together, stays together. This family lives in the state of California and they love each other and their human owners. They have a lot of toys in their home and the dogs lead quite a happy life.

The Tiny Human And The Fur Baby

This dog is quite happy with the tiny human by its side. The two of them live in quite a happy home and they travel a lot together. The mother often calls the duo her favorite in life. Interestingly, the two also happen to have the same haircut.

This picture looks to be a scene taken out of a fairy tale. The little girl is standing there with the two dogs in the snow makes for a very picturesque scene. The dogs are able to stand the cold and they look to be just waiting to pose for the camera.

It is quite important for a father to spend some quality time with his son. This father-son duo needs no counselling since they are spending a lot of time together, enough to let the love bloom among them.

Sitting In The Front

If you have a big dog, you are bound to get a big car. This owner has done just that. He has a Mercedes SUV that allows the Tibetan Mastiff to sit in the front without bumping its head on the roof. He looks so cute just sitting there.

The thick coat of the Tibetan Mastiffs allow them to survive out in the cold. This dog loves the cold and he stays out in the snow in order to do the thing that he loves the most.

Little Man On The Rescue

This little man is out to save someone from the cold and he does exactly that by trotting out in the cold without any help from his elders. He looks so cute just moving about without any care in the world.

This dog has grown a mane that rivals that of a lion. If a lion is the King of the jungle, this Tibetan Mastiff is the King of our hearts. The mane is truly a magnificent one and he is humble in his magnificence.

A Smile From Brothers

These two brothers are trying to make the people around them happy. They believe that smiling will help the cause and they are right. Even in dire times, a smile from these two will surely bring a smile on your face too.

Out For A Walk

If you are heading out with three huge dogs, you know that everyone around you is going to want a picture with your dogs. You also know that being a small child, people are going to help you with the handling of the dogs.

Leaving Fur All Around

One of the worries of having a pet is all the fur that they shed. This owner decided to have some fun with all the hair. He posed them to mirror his dog’s position and line up the hair so that it would look like another dog.

When you have two huge dogs, you are going to live life without any more care for anything in the world. You will love your life no matter what other people think about you. The man does not care about anything other than his dogs.

Many dogs have a habit of licking their owners but this Tibetan Mastiff has taken things to the next level when he chose to devour the entire hand of its owner. The owner could be handing out treats to the huge dog or the hand could be just yummy.

Boop My Face In The Snow

When it snows, you just want to push your face into the snow and leave a mark in the ground. This dog was fond of doing the same thing and he did just that when it snowed hard and there was enough snow on the ground to leave a face in it.

No Need Of The Leash

The Tibetan Mastiffs are rather docile dogs and they do not usually run away from their owners. However, this owner wants to play things safe and keeps a rather thick but short leash on his furry friend.

Dogs usually go through a growth spurt around the one year mark. These dogs just hit the 11-month mark and they have undergone a growth spurt where the Tibetan Mastiff certainly outgrew his sister by a whole lot of inches.

You have got to love the bond between the two dogs in the picture. Even though there is a lot less space to accommodate the two of them, they still want to be with one another.

When you are a child, you need someone to protect you from all that is wrong with the world. This guy has nothing to worry about from the world because he has got a furry little friend along with him.

All of us love to sleep in various positions that may seem weird to others. This dog is perfectly happy in this sleeping position so much so that he has a smile on his face while he is sleeping comfortably.

A Magnificent Sight To Behold

This seems more like the work of a cinematic photographer with a good hand at editing pictures. However, it is a shot that was taken by a normal point and shoot camera on a windy day when the mane of this majestic Tibetan Mastiff was billowing in the wind.

This dog does not look like much of a threat to anyone and we are forced to wonder why the owner had the Beware of the Dog sign on the front gate. Perhaps, the big size might fool the intruders into believing that this cute furball might be of any danger.

A Smile That Lights Up The World

This smile is just priceless. You can be thinking about all the depressing things in your life but they would stop affecting you once you have laid your eyes on this wondrous smile. This dog is indeed a beacon of happiness for the world.

A Car Full Of Love

You know you are successful in life when you have five big furry friends to fill your car trunk. The one that is bowing down looks more like a lion waiting to pounce on a prey though.

Let’s Pose For The Picture

When you have a coat of fur as thick as this dog has, you do not need to worry about the cold that the winter brings along with it. We wonder if this Mastiff can withstand the cold that the Night King brought with him in Game of Thrones.

If you have a Tibetan Mastiff, you can experiment on all the different kinds of hairstyle that you can think of. This man seems to have put on a headband on the dog so that the hair does not fall on his eyes.

When you are short a dancing partner, you can train your own Tibetan Mastiff to dance with you. Their huge size ensures that they are the perfect height on their hind legs to dance with a fully grown human being.

All That Cuteness In A Bag Of Fur

With all that fur falling on his face, we wonder if this dog can even see where he is going. Not that we would mind him bumping into the people around. He is just so lovable that you can just pick him up and hug him forever.

This is a rather hilarious image on the list. The owner of the Mastiff has gone down on all fours and is mimicking the same expression on his face. Even with all the effort from the owner, the effortless pose of the dog makes it way more cuter.

Many dog owners love to hold up their dogs in their arms. However, this becomes extremely difficult when you have a Tibetan Mastiff. The only thing that you can do is give them a piggy back ride like this woman is giving her dog in the picture.